Indian company, Reliance Jio has introduced Jio Phone 2 in Indian market. It will be available from August 15 at a price of Rs 2,999. 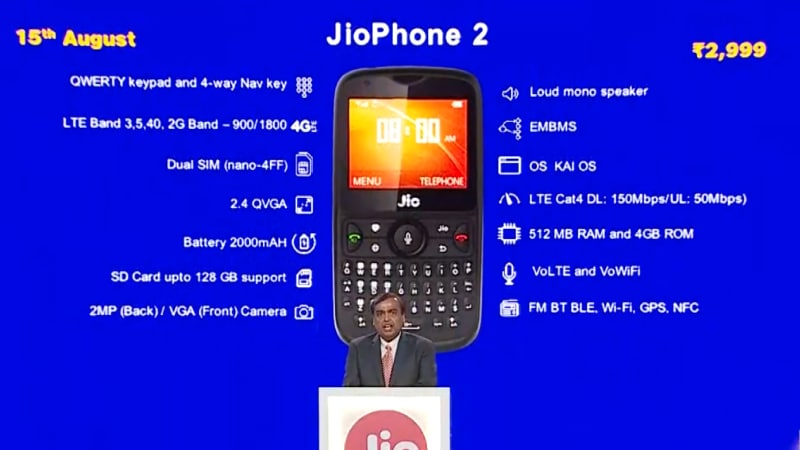 Specifications – Jio phone 2 offers a 2.4-inch with a resolution of 240×320 pixels QVGA display and operates on KAI OS. The device has storage of 4GB which can be expandable by using microSD card up to 128GB and is back up by a 2000mAh battery. The smartphone comes with a camera of 2-megapixel is placed at the back. There is another camera of 0.3 megapixel VGA sensor is placed at the front. It has several features such as Bluetooth, GPS,  VoLTE, VoWi -Fi, NFC, GPS, and FM radio. It supports some features such as LTE Cat4 DL: 150Mbps/UL: 50Mbps, and LTE Band 2,5,40, 2G Band 900/1800. The Jio phone also offers QWERTY keypad with four way navigation key and a button for voice command. The device also offers 24 Indian languages and voice commands.

Earlier the company launched the Jio Phone in our country in July 2017. It is available at a price of Rs 1500. The JIo phone offers a 2.4-inch QVGA TFT display and support 24 Indian languages. It has dual-core processor with the RAM of 512 MB. The device offers storage of 4GB that can be expandable up to 128GB. It supports 4G VoLTE network for connectivity and some pre-installed   Jio apps such as JioTV, JioMusic and JioCinema. The device also has 24 Indian languages and voice commands.