Chinese company, Xiaomi will introduce a new smartphone namely Mi 5X smartphone in China. It will likely to be available in Black, Gold, and Rose Gold colour for options at a price of CNY 1,999 or approximately Rs 19,000 on July 26.

As per report, the Mi 5X may offers a 5.5-inch full-HD with a resolution of 1080×1920 pixels display and operates on MIUI 9 which is based on Android 7.0 Nougat. It has the Snapdragon 625 SoC with 2GB of RAM. The smartphone may offer a dual rear camera with a dual-LED flash module and also has a fingerprint scanner.

Xiaomi has earlier introduced the Mi Max 2 smartphone in India at an event in New Delhi. It will available on July 20 at a price of Rs 16,999.

The new smartphones offers a massive 6.44-inch full-HD with a resolution of 1080×1920 pixels display and is the replacement of the Mi Max which was launches previous year. It operates on MIUI 8 which is based on Android 7.1.1 Nougat with several features such as Split Screen added. It has a 2GHz octa-core Snapdragon 625SoC with 4GB of RAM and an Adreno 506 GPU. The device comes with storage of 64GB that can be expandable up to 128GB by using microSD card and is back up by a 5300mAh battery which supports Qualcomm Quick Charge and provides 57 hours of talk time, 18 hours of video playback time, and 31 days of standby time. 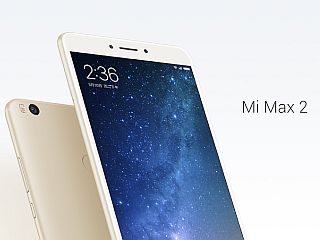 The device comes with a camera at rear of 12-megapixel with a Sony IMX386 sensor, PDAF, f/2.2 aperture and dual-LED flash and a camera at front of 5-megapixel with an f/2.0 aperture and real time beautification. It has several features including 4G VoLTE, dual-band Wi-Fi 802.11ac, USB Type-C, Bluetooth v4.2, and GPS/ A-GPS, an accelerometer, ambient light sensor, gyroscope, infrared sensor, fingerprint sensor, and proximity sensor. Its size are 174.1×88.7×7.6mm and weighs 211 grams