The Internet is a worldwide network which establishes a connection and provides transmission between various computers. It is the largest network in the world that uses both wired and wireless mode of communication to send and receive any information such as audio, data, video, and many more.

Now everybody uses the Internet for acquiring information, communication, and transferring data over the network. It provides an excellent source of information to the user. 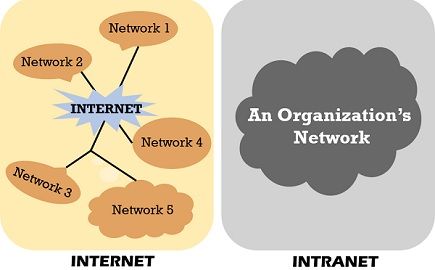 It is a part of Internet which is privately owned by an organization.  An Intranet connects all the computers together which provides access to files, share details, folders and materials inside the network of the company. It has a firewall which is surrounding over the network to avoid the unauthorized user from accessing the network. Only authorized users have permission to access the network.

An Intranet is a network which is in safe way to share the details, materials, and folders as the network are highly secured and restricted inside the organization. It also provides various services such as email, search, data storage, and many more.

Difference between INTERNET and INTRANET

There are some differences between Internet and Intranet are discussed below –

Similarities between INTRANET and INTERNET