The earth’s atmosphere has been keeping a sort of balance between its various constituents over the past billions of years. But the modern human activities such as large scale industrialization, rapid transport systems, changing life styles, and habits like smoking, burning of fossil fuels, and blind deforestation are upsetting the balance of atmosphere.

The major human activities which pollute the atmosphere are as follows:

Burning of fuels like coal, wood, and oil produces black smoke causing pollution in the air. Smoke contains poisonous gases like carbon monoxide and sulphur dioxide which pollutes the atmosphere.

The gas emitted by the engines of automobiles such as cars, buses, trucks, etc contain poisonous gases like carbon monoxide, nitrogen oxides, hydrocarbons, some lead compounds, and unburnt carbon particles which pollute the air. Motor vehicles are also a major cause of severe air pollution in big cities. The railway engines, ships, and airplanes also pollute the air.

Smoking produces carbon monoxide and nicotine which are poisonous chemicals and pollute air.

Dust produced by the heavy traffic and various industrial operations pollute air. The fossil fuels, coal, natural gas and petroleum are carbon compound and they produce carbon dioxide gas which goes into the atmosphere. The cultivation of soil releases large amount of carbon dioxide. It is estimated that carbon dioxide has already increased about 13 percent in the air. Further carbon monoxide produced by incomplete combustion of fossil fuels etc goes into the atmosphere. 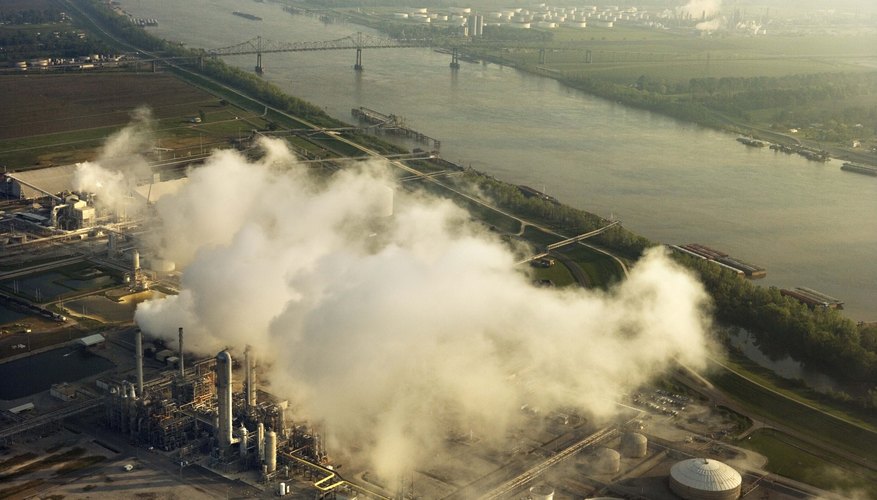 Deforestation is also a human activity which is dangerous. The green plants absorb excess carbon dioxide from the atmosphere for carrying out photosynthesis. New plants should be grown for this purpose.

Another part of the atmosphere that humans have directly affected is the ozone layer which blocks ultraviolet radiations. The highly useful ozone layer in the upper atmosphere has been threatened by human activities.